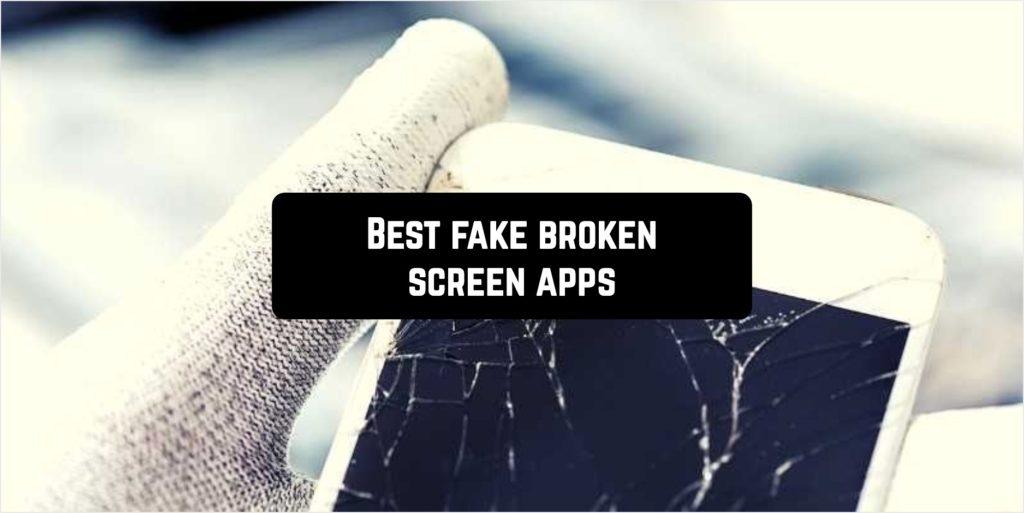 Among the programs in the category of tools, you can find a lot of joking applications that don’t perform any function other than lifting the mood. Among such applications – fake broken screen, which will make your device a bit unusual. The program performs the function of a standard theme or even a launcher, which imposes on the screen of your smartphone the effect of the broken glass.

If you have long dreamed of playing your friends, but have not yet come up with how we advise you to download the Broken Screen Prank for Android. This program will create a very natural effect of a broken screen, which will scare your friends, especially when you first click on it.

Although, no one forbids to install the software on your Android device, and then prank a friend, for example, to demonstrate new photos and so on. So, after installing the program, you should choose any of the proposed options with the effect of broken glass. Even though there are not many, but they are made with a high degree of plausibility.

The only thing left to do is to choose the appropriate way to activate this effect – automatically, after the start or when shaking the mobile device. Now it is possible to watch the reaction of the owner of the smartphone, who after its next unlock will find the screen in cracks with horror. At the same time, cracks are correctly displayed on top of any running applications and games.

A distinctive feature of the Broken Screen application is the ability to choose different effects such as fire screens and electric screens. 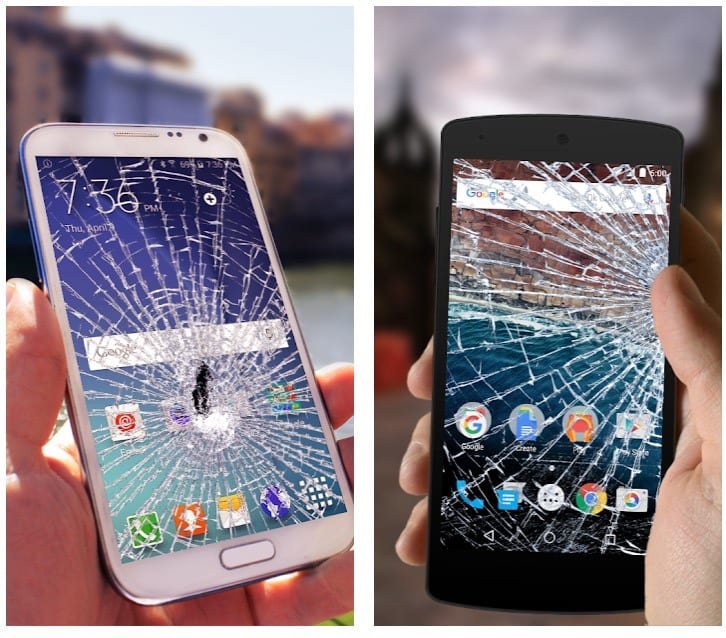 You may also like: 17 Best lock screen apps for Android

Broken Screen Prank is a joke application that you can use to prank your friends, making them believe they’ve broken the screen of your Android device. The idea is simple: when the app is running, even with a minimal shaking of the device on the display imaginary crack will appear.

You can also set up the application so that the screen “cracked” as soon as someone touches it. Launch the app and give the phone to a friend, and then watch the person’s reaction when they see the screen break from each touch.

Broken Screen Prank is a funny app that works surprisingly well. Perhaps you can find other similar applications on the Internet, but it’s obviously one of the best, if not the best. Prank your friends with such a great program. 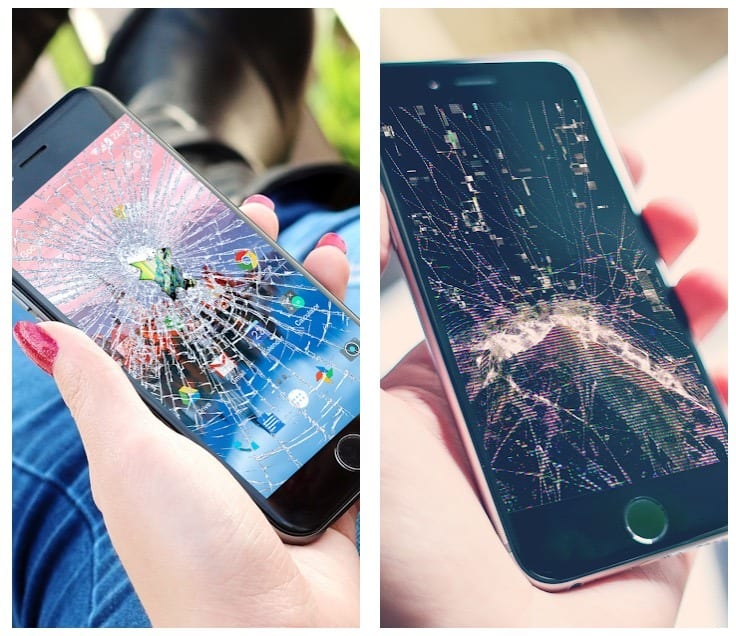 Crack your Mobile Screen is an application that, as its name suggests, allows you to fool your friends, making them think your screen is broken. And indeed, some of the effects are convincing enough to scare an unsuspecting victim.

In the settings, you can set the parameters of the application. For example, you can set the activation of a screen break effect by shaking the device or touching the screen, as well as with a delay of a few seconds. You can also enable the sound effect that accompanies the ‘breaking’ of the screen.

The effects are quite realistic and can really frighten someone and make them think it’s true.

The application is also live wallpaper. You can set the cracked screen as your wallpaper and widget.

Crack your Mobile Screen – a good application for jokes, which surely scare your friends, making them think that they now owe you a new phone. 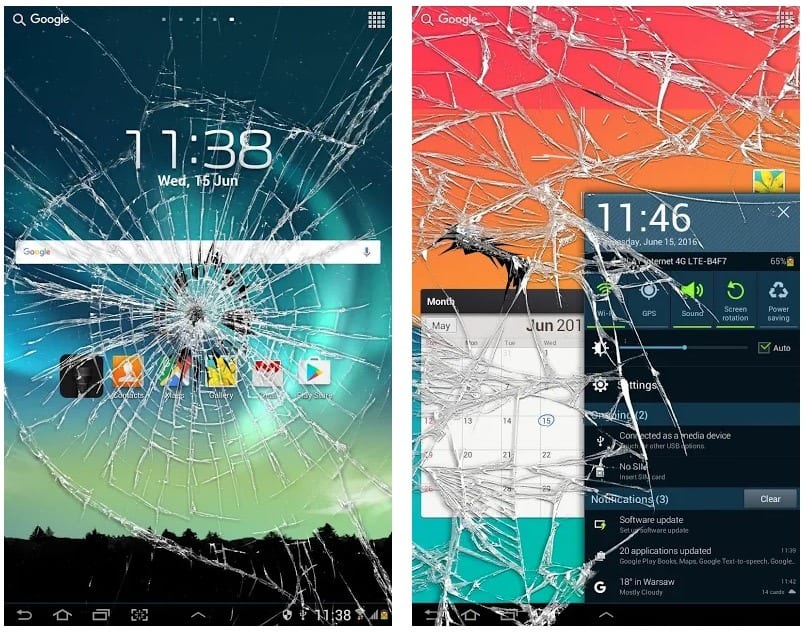 Broken Glass Live Wallpaper & Prank app – the application will allow you to play your friends, relatives, and colleagues and have fun together.

The idea is: run the application and choose the best option for you to configure. Switch to the background mode and give the phone to a friend or acquaintance. As soon as he touches the sensor with his finger, the sensor will crack and the speakers will sound like broken glass. And here’s the most important thing to follow the reaction of a friend: indescribable shock in the eyes and an immediate desire to return the phone back to its owner.

Of course, not everyone will be so much surprised, but the reaction is almost always there. In addition, the control panel can be used to change the settings as you wish. From the sound to the various effects.

To create your own cracked screen: 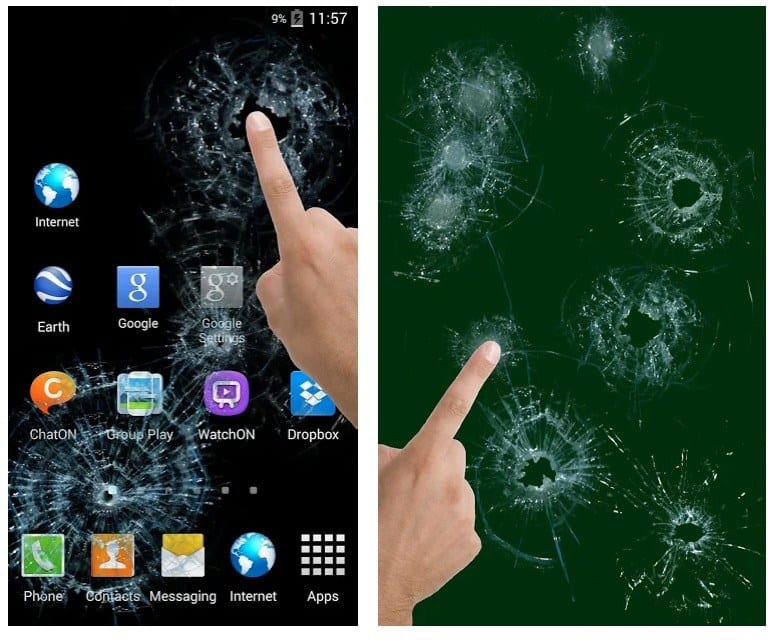 Cracked Screen: Best Prank App is a fun app that lets you play your friends and family. It allows you to simulate a broken screen. When a person touches the screen, the sound is heard and the phone starts to crack.

The main feature os the application

All this looks really realistic. A person who doesn’t aware can be scared and mentally prepared to part with a certain amount of money to repair your device. Download this application to your phone or tablet, and have fun watching the unusual reaction of your friends and family. 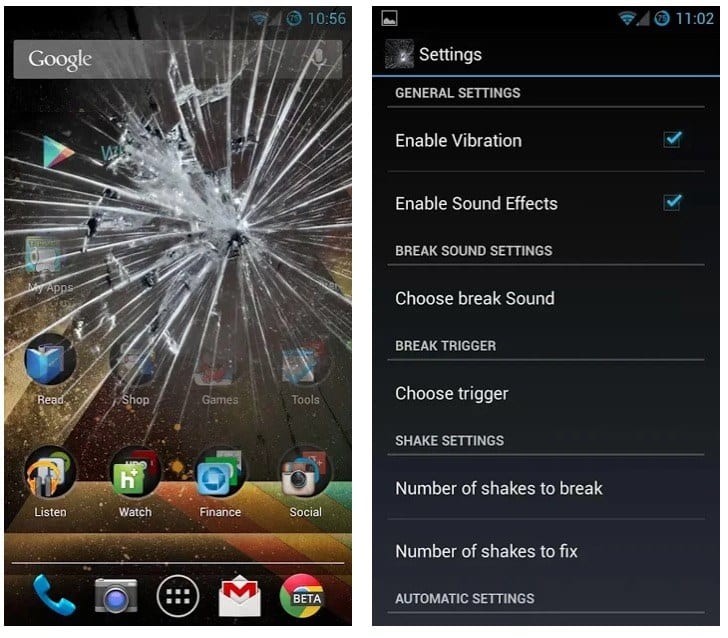 It features a stunning 3D parallax effect using the sensors of your device (gyroscope or accelerometer).

Among other things, in the settings you can turn on a function that will allow you to play your friends: when you shake the device, you will hear the sound of broken glass and immediately cracks and chips will appear on the screen. 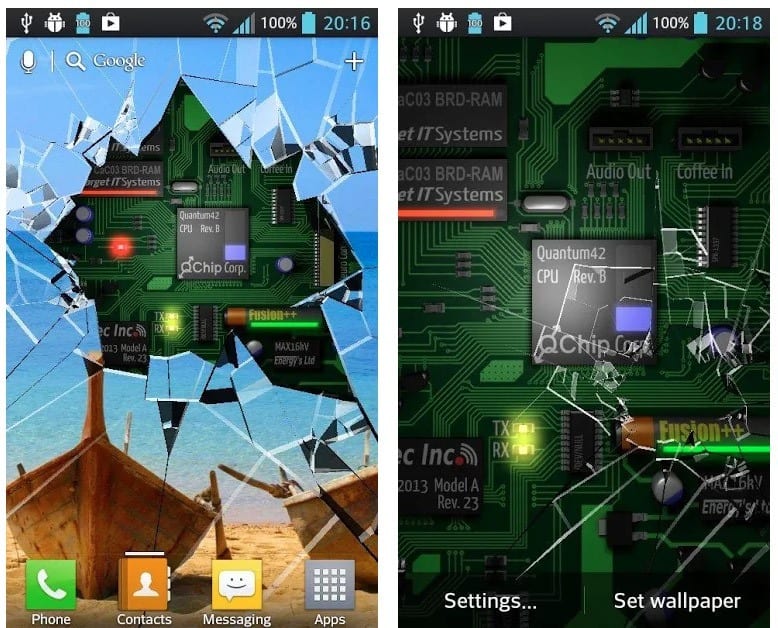 There is a huge number of joking applications that imitate a broken screen of your smartphone. Some of them are too primitive, and the effects are far from realistic.

And some, such as the product Broken Screen Prank: Crack, Fire & Electric Screen, is able not only to simulate the appearance of the cracked display but also to offer a choice of several other very interesting findings and solutions. However, in any case, the idea remains the same – when interacting with the device, there are unexpected metamorphoses. 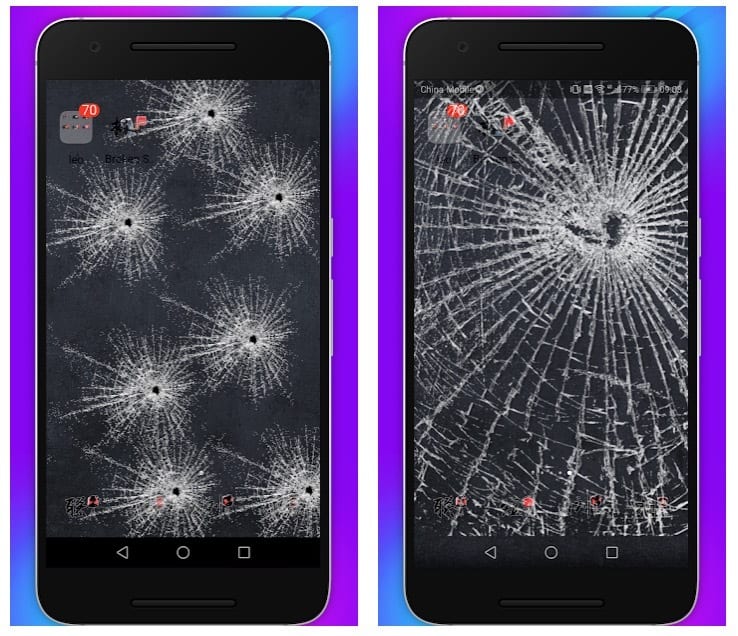 After the launch of Broken Screen Prank and before you play your friend, the user must make certain settings. For example, setting an action to catalyze further processes. It could be just touching the touchscreen or shaking the device slightly. You should also choose the sound effect that will accompany the action itself, and also adjust its volume. Canceling the “broken screen” will be a shaking Android device again.

In addition to the boring cracked display Broken Screen Prank is able to offer a number of other beautiful and realistic effects – fire and electric screens, electricity discharge, a pistol shot, a boxer’s fist. Naturally, each effect has its own sound accompaniment. 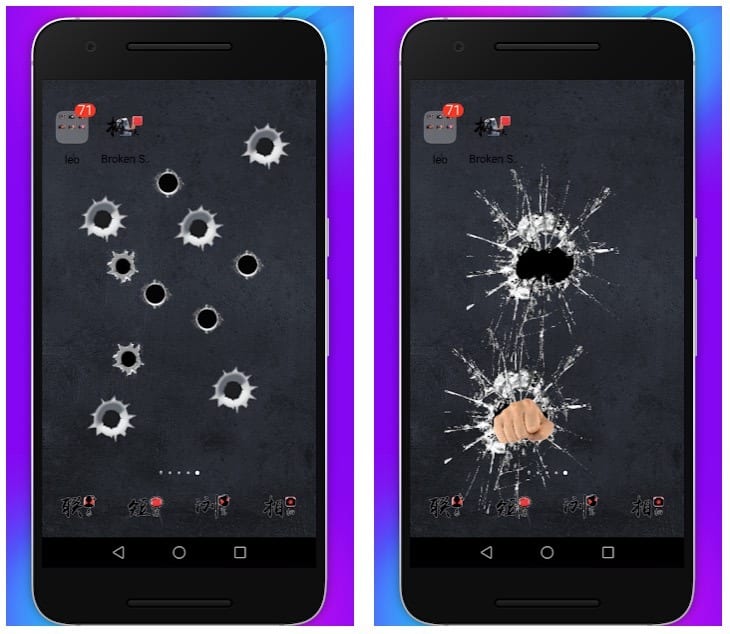 Would you mind to fool your friends? Or maybe you have the courage to prank strangers? Then try the effect of this Android application, which imitates the broken screen of a mobile device. The program works on a simple principle – after a specified period of time, the screen of your device is covered with small cracks.

All the value of the simulator is to observe the reaction of a person – fear, misunderstanding. Naturally, it’s not necessary to warn anybody, and it is better if the participant of the experiment is not any budgetary device, and the top smartphone – the effect will turn out more intensive.

A realistic visual component of Broken Screen Prank is perfectly accompanied by the plausible audio accompaniment. To get everything back, simply touch the display again or shake the unit. But don’t forget about the danger of inadequate reaction – a person in fright can just throw off the device, and then the real cracks will appear on the screen. 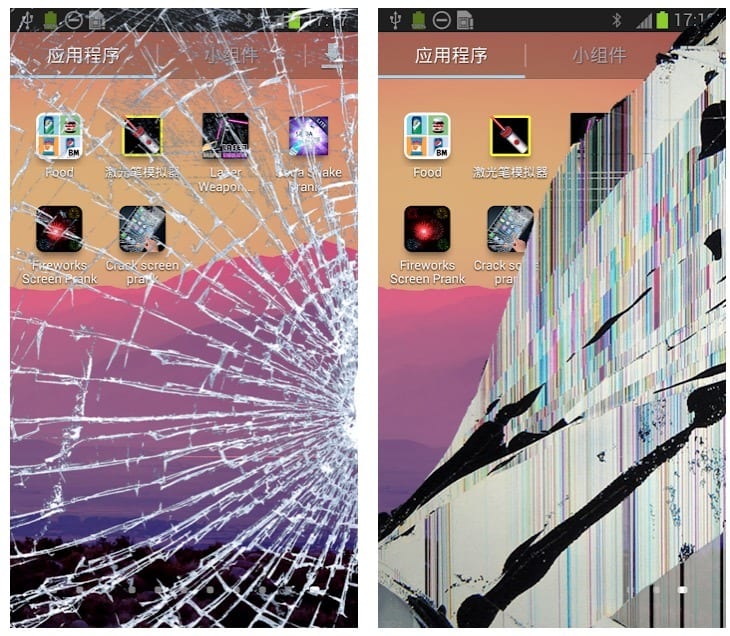 Android application Fake Broken Screen is nothing but a funny joke software for playing jokes.

All you need to do is to take your friend’s smartphone for a few minutes to covertly install the software. After you do this, you need to go into the settings of the application and choose there the broken display. Did you? Then it remains only to set how to activate the virtual breakage of the screen. If you want, you can set the timer, but we personally recommend you to set the activation using the accelerometer, then you can shake the smartphone.

Key features of the application:

By the way, virtual cracks not only look incredibly realistic, but they still remain on the screen on top of any activated applications, thereby increasing the realism, creating the effect of a really broken display. 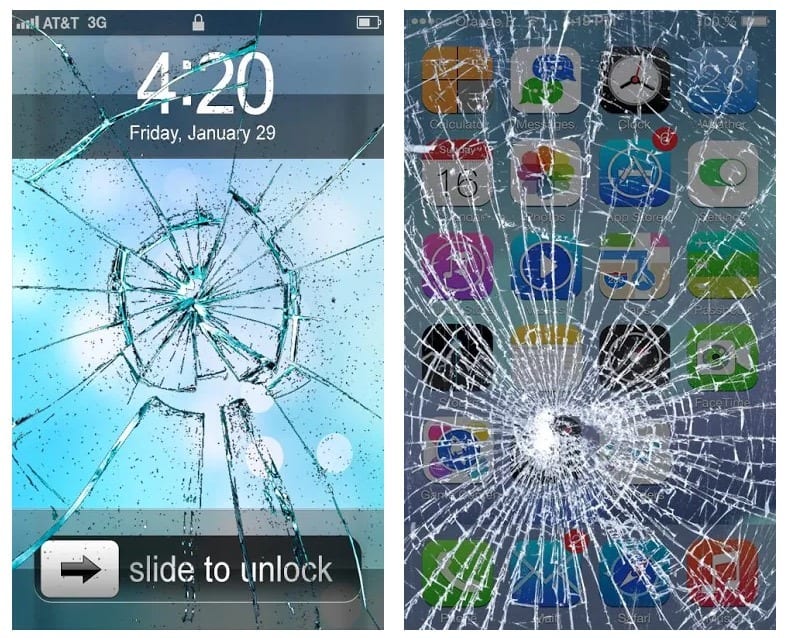 Broken Screen Prank is a free entertainment app that lets you have a great time with your friends and acquaintances. All that this small utility does is to imitate the defects of the screen of a mobile device rather realistically.

So, if you wish to turn to the genius of evil jokes the program Broken Screen Prank easily will help with a minimum of active actions. The truth is that this joke will have an effect only once. 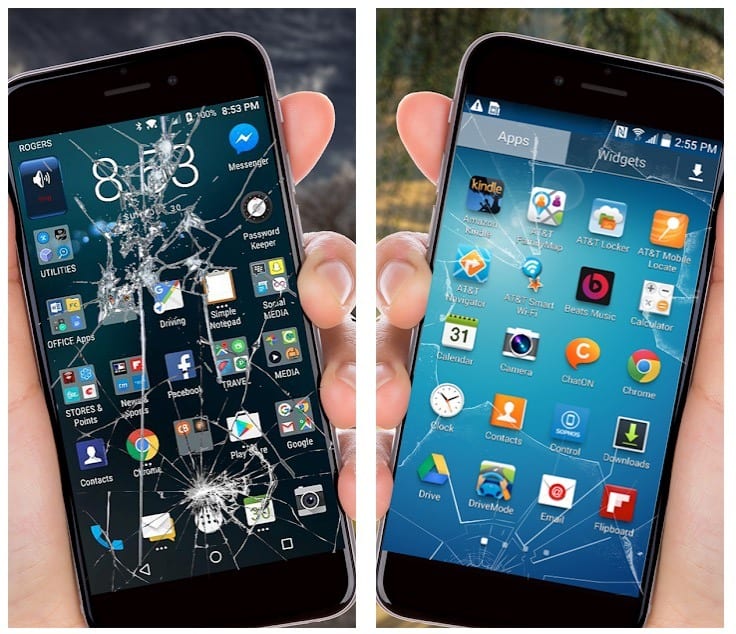 You may also like: 15 Best Screen Saver apps for Android

Broken  Screen Prank is an entertainment application for smartphones and tablets on Android. Download it to your device for free. The program forms an effect of real cracks on the gadget display. With its help, you can prank another user.

The application simulates a broken screen. And if you don’t look attentively, you can believe it. The problem is that to install the program in someone else’s smartphone is not so easy. 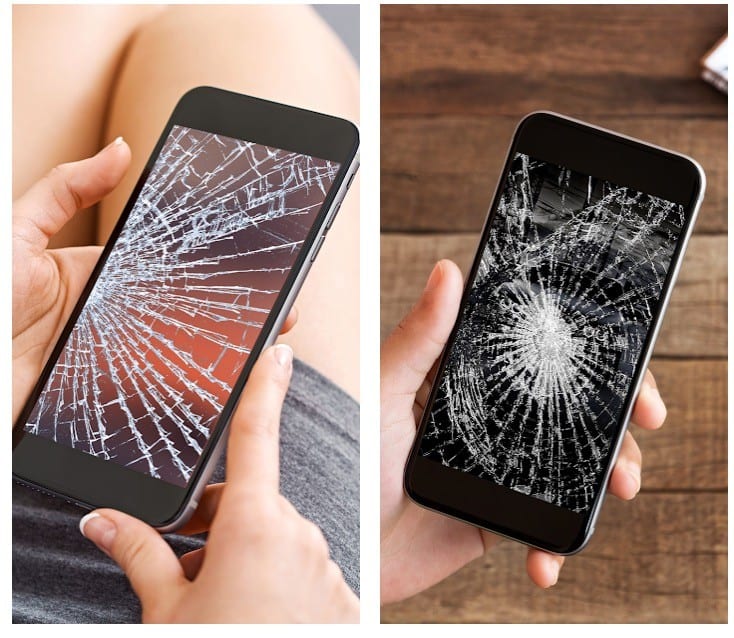